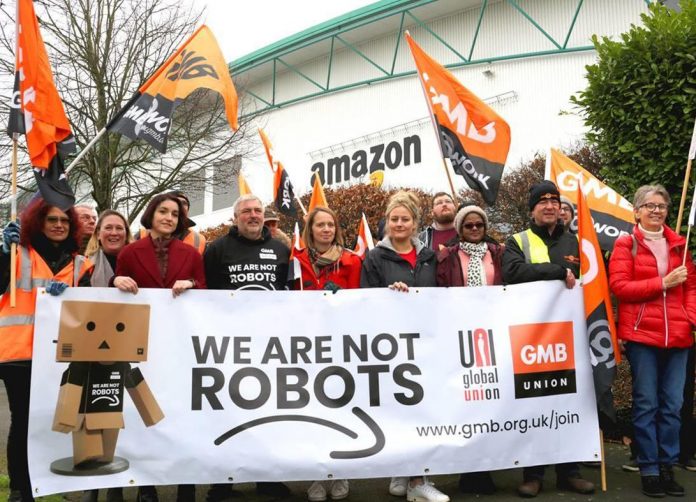 Black Friday is so called since it’s the day merchants would generally begin seeing earnings and running in the black. And Amazon has actually ended up being a driving force behind the rise of e-commerce on the retail vacation.

But this year, Amazon storage facility workers in Europe are utilizing the day after Thanksgiving to pass on a much darker Black Friday message.

Union employees in the UK, Spain, Italy and Germany have actually staged a wave of demonstrations and strikes versus what they call Amazon’s hazardous, high-pressure work culture and “its aggressive anti-union actions,” according to a news release from Switzerland- based UNI Global Union on behalf of a number of other European unions, too.

“The conditions our members at Amazon are working under are frankly inhuman. They are breaking bones, being knocked unconscious and being taken away in ambulances,” Tim Roache, basic secretary of the UK-based GMB union, statedin a statement “Enough is enough. Time these workers were treated like humans, not robots.”

Amazon counters those claims, promoting itself as a “fair and responsible employer” with “safe and positive” working conditions.

“We believe in continuous improvement across our network and maintain an open and direct dialogue with our associates,” a spokesperson stated in a declaration. “Amazon has invested over 27 billion euros ($30.6 billion) and created over 75,000 permanent jobs across Europe since 2010. These are good jobs with highly competitive pay, full benefits, and innovative training programs like Career Choice that pre-pays 95 percent of tuition for associates.”

Union authorities forecasted that some 2,600 employees would appear at demonstrations throughout the day, which in many cases consisted of task walk-offs. But Amazon stated its European satisfaction network is completely functional and reports to the contrary are “simply wrong.”