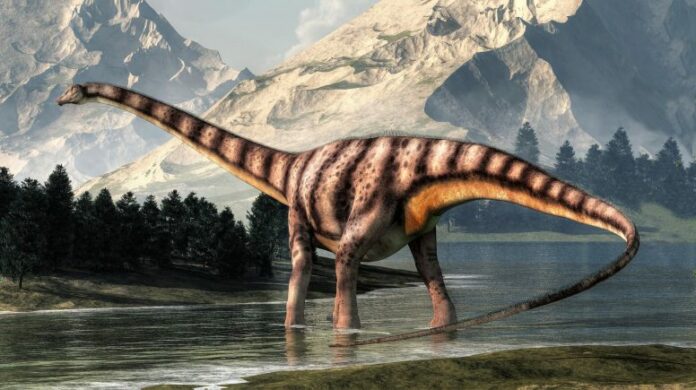 Diplodocus was a genus of diplodocid sauropod dinosaurs, whose fossils have been first found in 1877 by S. W. Williston.

Diplodocids – giant herbivorous dinosaurs with lengthy necks and tails – might have been capable of transfer their tails like bullwhips at speeds of as much as 33 meters per second (108 ft per second) or greater than 100 kilometers per hour (70 miles per hour). This is in accordance with a modeling examine revealed at this time (December 8) within the journal Scientific Reports.

However, these findings contradict those of a previous study, which proposed that a hypothetical structure attached to the end of a diplodocid tail – similar to a tuft at the end of a bullwhip – could move faster than the speed of sound (340 meters per second or 1100 feet per second) and create a small supersonic boom.

Diplodocids, or members of the family Diplodocidae, are a group of sauropod dinosaurs. The family includes some of the longest creatures ever to walk the Earth, including Diplodocus and Supersaurus, some of which may have reached lengths of up to 42 meters (138 ft).

Simone Conti and colleagues simulated diplodocid tail movements using a model based on five fossilized diplodocid specimens. The model tail is over 12 meters (39 feet) long, weighs 1,446 kilograms (3,188 pounds), and consists of 82 cylinders – representing vertebrae – attached to an unmovable hip bone base. When the tail base moves in an arc, it generates a whip-like movement with a maximum speed of 33 meters per second (108 feet per second) – more than ten times slower than the speed of sound in standard air and too slow to create a supersonic boom.

The authors tested whether their model tail would be able to withstand the stress of moving fast enough to create a supersonic boom. They found that the thin whip-like tail could not move at a maximum speed of 340 meters per second (1100 feet per second) without breaking.

The authors then assessed whether adding three different one-meter-long hypothetical structures – mimicking the end of a bullwhip – to the end of the model tail could allow it to travel at the speed of sound without rupturing. The first structure consisted of three segments made of skin and keratin, the second consisted of braided keratin filaments, and the third had a flail-like structure composed of soft tissues.

None of the structures was able to withstand the stress of moving at 340 meters per second (1100 feet per second) without the tail breaking.