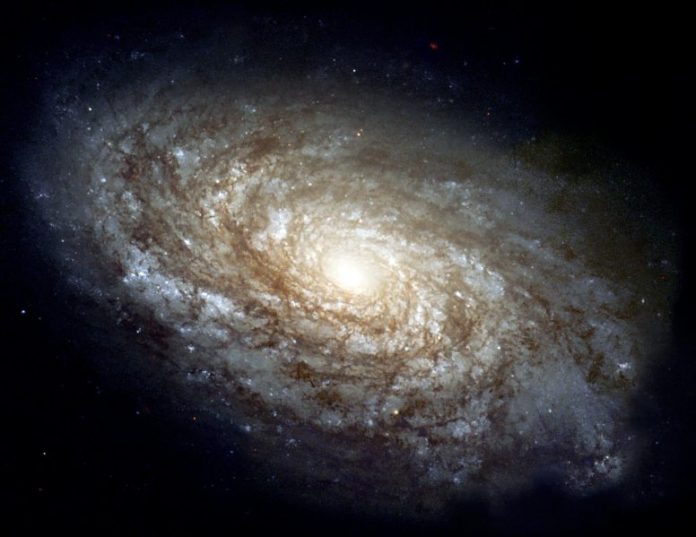 Published just recently in Nature, a global group of scientists has actually observed an enormous, turning disk galaxy simply 1.5 billion years after the Big Bang—1.5 billion years previously in cosmic history than astronomers had actually anticipated to discover such a galaxy based upon previous research studies. The research study has actually sustained argument about how galaxies in the early Universe put together.

The observations were used among the most effective radio telescopes on the planet, the Atacama Large Millimeter/submillimeter Array (ALMA), in the Atacama Desert in northern Chile.

“This is an exciting discovery for astronomers because it provides clues as to how large-scale structure began to form in the Universe,” stated Dr. Alfred Tiley from the UWA node of the International Centre for Radio Astronomy Research (ICRAR).

According to our present understanding of cosmology, galaxy development follows a hierarchical order. First, dark matter ‘haloes’ are believed to establish, which then attract surrounding gas that cools to form stars and ultimately galaxies.

“In the early stages, some models predict that the gas heats up as it falls into the dark matter halo,” Tiley stated.

“Over an extended period the gas cools and permits the galaxy’s disk to form.

“But the discovery of an enormous disk galaxy simply 1.5 billion years after the Big Bang informs us its development might have followed a various course—perhaps a cold-accretion design in which the infalling gas stayed cold, enabling the quick condensation of the disk.

“At this stage, this is just one galaxy, so we need to find more like it to further test our models and help us better understand what exactly was going on in the early Universe.”

For more on this discovery, read Massive Rotating Disk in Early Universe Discovered by Largest Radio Telescope in the World.