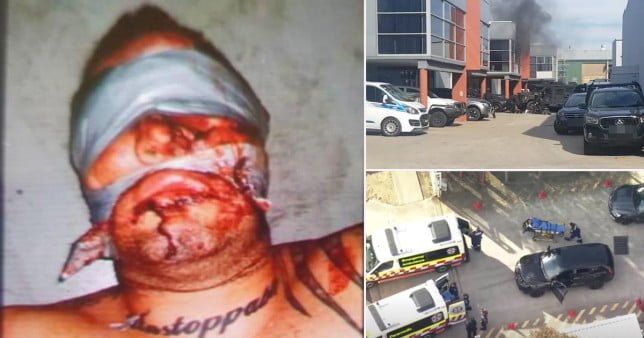 This image of a bloodied and gagged ex-motorcycle gang member was sent out to his household on the night he was supposedly abducted in Australia.

The gang was apparently requiring AU$100 million (£54.6 million) for the release of Dillon Mancuso, 37, who was supposedly abducted at gunpoint and driven to a storage facility in Sydney, where he was held for 6 hours.

Mancuso, a previous member of the Lone Wolf gang, was photographed with duct tape covering his eyes and mouth, while blood streamed down his face and inflamed lip.

It goes on to state: ‘Send to his friends who value his life and will negotiate’, the Daily Telegraph reported

But the extortion plot stopped working when equipped cops stormed the structure as it was supposedly set on fire by the gang, prior to Mancuso was saved using absolutely nothing however his white underclothing.

According to cops, a group of guys, among them equipped with a weapon, had actually required their method into a residential or commercial property in Bringelly at around 3am on Tuesday and dragged Mancuso into a waiting lorry exterior.

They were tracked by professional detectives to a commercial storage facility some 28km away in Revesby, where captive settlements occurred.

He was released after cops stormed the structure while the gang supposedly set fire to the storage facility as they went into.

A neighboring workplace employee informed Daily Mail Australia: ‘I kept an eye out the window and 3 police officer cars and trucks were obstructing the driveway and requiring individuals in the system to come out.

‘We sort of saw it coming. Those guys had been rolling around for a few months bringing in motorbikes and exotic cars and making a lot of noise.’

Detective Superintendent Andrew Koutsoufis stated: ‘At this stage it appears there are some organised crime and bikie-related links’.

He included: ‘The level of violence towards the supposed victim was rather serious and worrying. We think it was totally targeted.

‘The incident was exceptionally dangerous and could have been even more severe, or even fatal.’

Seven males – 2 23-year-olds and the others aged 16, 19, 22, 26 and 27 were later on charged with kidnapping with intent to ransom leading to real physical damage, break and go into, damaging proof, and taking part in a gang.

Inquiries into the occurrence are continuing.