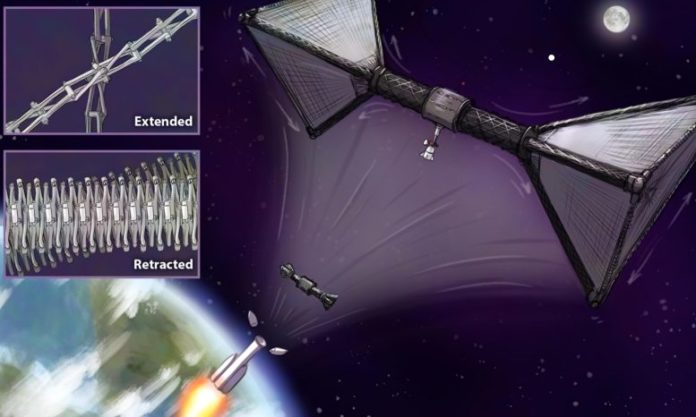 Sustained human presence in house has been a core purpose of NASA for decades. NASA’s recent Plan for Sustained Lunar Exploration and Development lays out a vision for long-term human exploration of cislunar space, on the lunar surface, and on Mars as part of the Artemis program. Long-duration spaceflight poses serious challenges for the human body, including muscle atrophy, bone loss, eyesight degradation, and immunosuppression. Many of these effects are linked to a lack of gravity.

While significant progress has been made mitigating individual symptoms associated with long-term zero-g exposure, the ability to generate artificial gravity would eliminate the root cause of many problems, and could greatly improve crew health on long-duration missions.

The core of our solution is a high-expansion-ratio deployable structure (HERDS) built from mechanical metamaterials. Specifically, we exploit two kinematic discoveries made in the last 5 years: shearing auxetics and branched scissor mechanisms. We intend to produce tube structures with an unprecedented 150x expansion ratio.

Our Phase I NIAC study has demonstrated the viability of this approach and pointed us to several technical problems that must be addressed in Phase II.

The key technical work in Phase II will be focused on four specific thrusts:

This work will have immediate and long term impact for NASA’s objectives. In the near term, such a structure would make sustained human habitation in cislunar space, for example, as part of the Lunar gateway, possible. In the medium-to-longer term, such structures will be critical to sustaining humans in deep space. Finally, large structures will also advance astronomy by supporting large-scale telescope arrays.

Scientists Figure Out Why Thinking Hard Makes You Tired