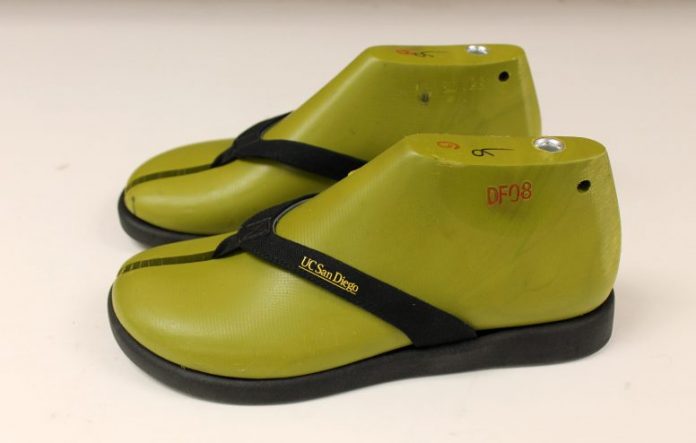 As the world’s most popular shoe, flip-flops represent an unpleasant portion of plastic waste that winds up in garbage dumps, on seasides and in our oceans. Scientists at the University of California San Diego have actually invested years working to fix this issue, and now they have actually taken an action even more towards achieving this objective.

Sticking with their chemistry, the group of scientists created polyurethane foams, made from algae oil, to satisfy industrial requirements for midsole shoes and the foot-bed of flip-flops. The outcomes of their research study are released in Bioresource Technology Reports and explain the group’s effective advancement of these sustainable, consumer-ready and naturally degradable products.

The research study was a cooperation in between UC San Diego and start-up business Algenesis Materials—a products science and innovation business. The job was co-led by college student Natasha Gunawan from the laboratories of teachers Michael Burkart (Division of Physical Sciences) and Stephen Mayfield (Division of Biological Sciences), and by Marissa Tessman from Algenesis. It is the current in a series of current research study publications that jointly, according to Burkart, use a total option to the plastics issue—a minimum of for polyurethanes. “The paper shows that we have commercial-quality foams that biodegrade in the natural environment,” stated Mayfield. “After hundreds of formulations, we finally achieved one that met commercial specifications. These foams are 52 percent biocontent—eventually we’ll get to 100 percent.”

In addition to designing the ideal solution for the commercial-quality foams, the scientists dealt with Algenesis to not just make the shoes, however to deteriorate them too. Mayfield kept in mind that researchers have actually revealed that industrial items like polyesters, bioplastics (PLA) and fossil-fuel plastics (FAMILY PET) can biodegrade, however just in the context of laboratory tests or commercial composting.

“We redeveloped polyurethanes with bio-based monomers from scratch to meet the high material specifications for shoes, while keeping the chemistry suitable, in theory, so the shoes would be able to biodegrade,” Mayfield discussed.

Putting their tailored foams to the test by immersing them in standard garden compost and soil, the group found the products deteriorated after simply 16 weeks. During the decay duration, to represent any toxicity, a group of researchers led by UC San Diego’s Skip Pomeroy determined every particle shed from the naturally degradable products. They likewise recognized the organisms that broke down the foams.

“We took the enzymes from the organisms degrading the foams and showed that we could use them to depolymerize these polyurethane products, and then identified the intermediate steps that take place in the process,” stated Mayfield. “We then showed that we could isolate the depolymerized products and use those to synthesize new polyurethane monomers, completing a ‘bioloop.’”

This complete recyclability of industrial items is the next action in the researcher’s continuous objective to attend to the existing production and waste management issues we confront with plastics—which if not attended to, will lead to 13 billion metric lots of plastic in garbage dumps or the natural surroundings by 2050. According to Pomeroy, this ecologically hostile practice started about 60 years ago with the advancement of plastics.

“If you could turn back the clock and re-envision how you could make the petroleum polymer industry, would you do it the same today that we did it years ago? There’s a bunch of plastic floating in every ocean on this planet that suggests we shouldn’t have done it that way,” kept in mind Pomeroy.

While commercially on track for production, doing so financially refers scale that the researchers are exercising with their making partners.

“People are coming around on plastic ocean pollution and starting to demand products that can address what has become an environmental disaster,” stated Tom Cooke, president of Algenesis. “We happen to be at the right place at the right time.” Foot-bed of flip-flops being pulled from a mold. Credit: Photo thanks to Stephen Mayfield, UC San Diego

The group’s efforts are likewise manifested in the facility of the Center for Renewable Materials at UC San Diego. Begun by Burkart, Mayfield, Pomeroy and their co-founders Brian Palenik (Scripps Institution of Oceanography) and Larissa Podust (Skaggs School of Pharmacy and Pharmaceutical Sciences), the center concentrates on 3 significant objectives: the advancement of sustainable and sustainable monomers made from algae and other biological sources; their solution into polymers for varied applications, the development of artificial biology platforms for the production of monomers and crosslinking elements; and the advancement and understanding of biodegradation of sustainable polymers.

“The life of material should be proportional to the life of the product,” stated Mayfield. “We don’t need material that sits around for 500 years on a product that you will only use for a year or two.”

The research study was supported by grants from the Department of Energy Bioenergy Technologies Office (DE-SC0019986) and the National Science Foundation (1926937) to Algenesis Materials.

Burkart, Mayfield and Pomeroy are all co-founders of Algenesis and have equity. In addition, Burkart and Pomeroy are clinical consultants and Mayfield is acting CEO and on the Board of Directors.