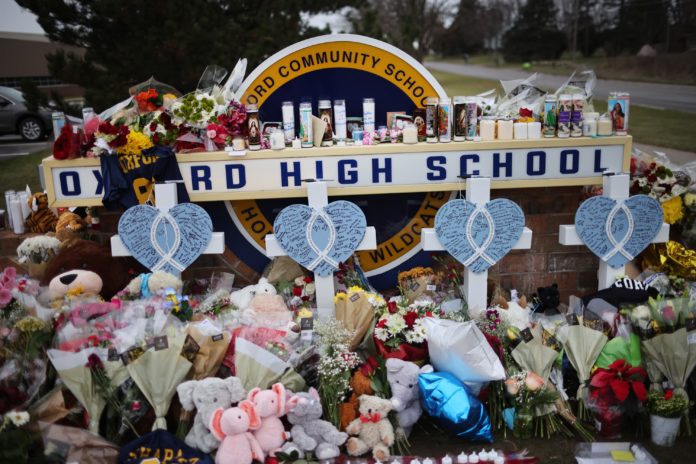 A memorial beyond Oxford High School on December 03 2021 in Oxford, Michigan.

The New York Times stated Friday that it is evaluating a leading editor at the paper’sWirecutter com for tweeting scathing messages about a gun-rights group, and for supposedly leaving upset, profane voicemails for the group.

The tweets and the supposed voicemail by Erin Marquis, Wirecutter’s lead editor for computer/networking, each referenced a news release opposing weapon control laws sent by the group Great Lakes Gun Rights on the heels of a shooting at Oxford High School in rural Detroit that eliminated 4 trainees.

Wirecutter com is a product-recommendation website that the Times acquired in 2016.

Marquis was determined by the National Association for Gun Rights as the lady who left 2 voicemails Thursday for its Michigan affiliate, the Great Lakes group.

“Hi, I’m a journalist with The New York Times. I’m just calling to wonder, I have two questions. How do you sleep at night?” the lady stated on the clip published on You Tube by the nationwide group.

“Aren’t you just, like, a little bit worried that there might be a hell, and when you meet God he might send you there?” the lady asked.

“You f—ing ghouls, I hope that there is a God in heaven, so he judges you when you die,” the lady stated in a 2nd audio clip.

That group on Friday asked on Twitter if the Times will “apologize and reprimand” Marquis for the voicemails it declares she left.

“We’re not surprised that an angry, liberal, anti-gun New York Times reporter would show their true colors and wish we’d burn in hell – we’re just glad she was actually foolish enough to leave two voicemails for us to laugh at, and then publish,” stated Dudley Brown, president of the National Association for Gun Rights in a ready declaration.

Times spokesperson Danielle Rhoades Ha, in an e-mail to CNBC, stated, “We expect our employees to behave in a way that is consistent with our values and commitment to the highest ethical standards.”

“We are currently reviewing this matter, which involves an employee of Wirecutter, our product recommendation site, who does not work in The New York Times newsroom,” the spokesperson stated.

She was employed for the Wirecutter task in July after investing 4 years as editor ofJalopnik com, an automobile lover website.

The Times, like lots of other wire service, has a policy concerning making use of social networks by reporters, which advises them from making remarks online that can be seen by readers as prejudiced on political concerns.

The National Association for Gun Rights, which states it has 4.5 million members, in an e-mail Thursday kept in mind that earlier in the day it sent out press reporters “a press release condemning the gun control bills and initiatives being pushed by Gov. Gretchen Whitmer and Senate Democrats in the Michigan Legislature in response to the tragedy at Oxford High School.”

On Thursday afternoon, Marquis tweeted: “Just got a press release from the Great Lakes Gun Rights organization about protecting gun rights from democrats in Michigan and I am literally shaking with rage.”

” I hope there is a God and they [meet] that God one day,” Marquis composed.

“My brother and sister in law are both teachers in the suburbs,” Marquis composed in another tweet.

She then offered the telephone number and e-mail of the group, “If you want to make your displeasure known.”

Marquis erased those tweets and eliminated her Twitter account from public view after the National Association for Gun Rights sent a news release determining her as the lady who had actually called the Michigan affiliate.

In assistance that was upgraded in November 2020 and released on the paper’s site, The Times stated, “Social media presents potential risks for The Times.”

“If our journalists are perceived as biased or if they engage in editorializing on social media, that can undercut the credibility of the entire newsroom,” the assistance states. “We’ve always made clear that newsroom employees should avoid posting anything on social media that damages our reputation for neutrality and fairness.”

“In social media posts, our journalists must not express partisan opinions, promote political views, endorse candidates, make offensive comments or do anything else that undercuts The Times’s journalistic reputation,” the policy states.

“Our journalists should be especially mindful of appearing to take sides on issues that The Times is seeking to cover objectively.”