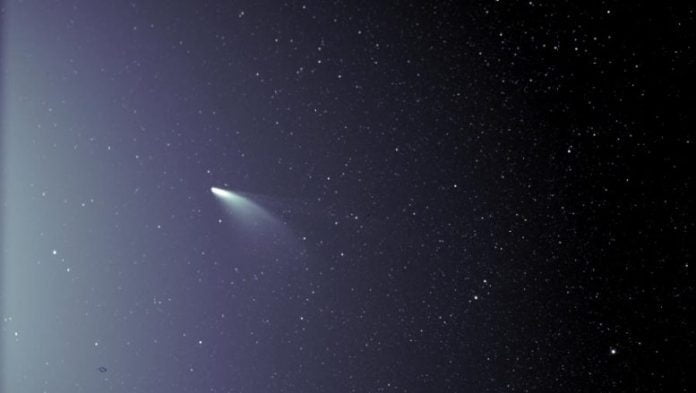 An unprocessed image from the WISPR instrument on board NASA’s Parker Solar Probe reveals comet NEOWISE on July 5, 2020, soon after its closest technique to the Sun. The Sun runs out frame to the left. The faint grid pattern near the center of the image is an artifact of the method the image is produced. The little black structure near the lower left of the image is brought on by a grain of dust resting on the imager’s lens. Credit: NASA/Johns Hopkins APL/Naval Research Lab/Parker Solar Probe/Brendan Gallagher

NASA’s Parker Solar Probe was at the ideal location at the correct time to catch a unique view of comet NEOWISE on July 5, 2020. Parker Solar Probe’s position in area provided the spacecraft an unequaled view of the comet’s twin tails when it was especially active simply after its closest technique to the Sun, called perihelion.

The comet was found by NASA’s Near-Earth Object Wide-field Infrared Survey Explorer, or NEOWISE, on March 27. Since then, the comet — called comet C/2020 F3 NEOWISE and nicknamed comet NEOWISE — has actually been identified by a number of NASA spacecraft, consisting of Parker Solar Probe, NASA’s Solar and Terrestrial Relations Observatory, the ESA/NASA Solar and Heliospheric Observatory, and astronauts aboard the International Space Station.

The image above is unprocessed information from Parker Solar Probe’s WISPR instrument, which takes pictures of the Sun’s external environment and solar wind in noticeable light. WISPR’s level of sensitivity likewise makes it appropriate to see great information in structures like comet tails. Parker Solar Probe gathered science information through June 28 for its 5th solar flyby, however the accessibility of extra downlink time enabled the group to take additional images, including this picture of comet NEOWISE. The twin tails of comet NEOWISE are seen more plainly in this image from the WISPR instrument, which has actually been processed to increase contrast and eliminate excess brightness from spread sunshine, exposing more information in the comet tails.

The lower tail, which appears broad and fuzzy, is the dust tail of comet NEOWISE — produced when dust takes off the surface area of the comet’s nucleus and routes behind the comet in its orbit. Scientists want to utilize WISPR’s images to study the size of dust grains within the dust tail, in addition to the rate at which the comet sheds dust. The small shooting star in the lower center of this image is Comet Neowise imagined from the International Space Station as it orbited above the Mediterranean Sea in between Tunisia and Italy. Credit: NASA

The upper tail is the ion tail, which is comprised of gases that have actually been ionized by losing electrons in the Sun’s extreme light. These ionized gases are buffeted by the solar wind — the Sun’s continuous outflow of allured product — developing the ion tail that extends straight far from the Sun. Parker Solar Probe’s images appear to reveal a divide in the ion tail. This might indicate that comet NEOWISE has 2 ion tails, in addition to its dust tail, though researchers would require more information and analysis to verify this possibility.

These images from ESA and NASA’s Solar and Heliospheric Observatory reveal comet NEOWISE as it approached the Sun in late June 2020. The instrument that produced this information is a coronagraph, which utilizes a strong disk to shut out the Sun’s intense face, exposing the relatively external environment, the corona, together with things like comet NEOWISE. Credit: ESA/NASA/SOHO