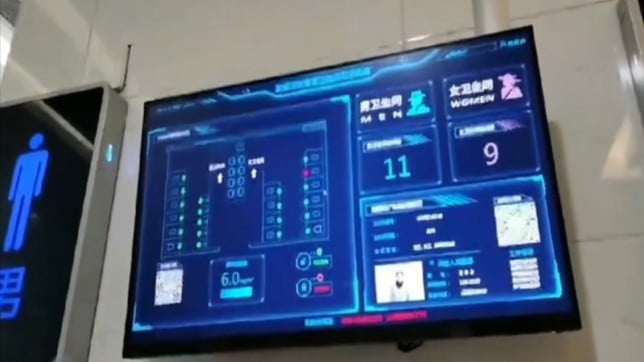 Smell sensing units on a shopping center’s brand-new modern public bathrooms is alerting buyers which cubicles are a breath of fresh air and which are too smelly to utilize.

The bathrooms, at a shopping center in Sichuan Province in China, feature their own smelly-vision screen at the entryway.

Potential users can examine to see which stalls are prepared for action and which require to be left for 5 minutes.

The screens reveal pictures of private cubicles in the males’s and females’s areas with their own stink score permitting buyers to take their choice.

High- tech sensing units determine the levels of harmful smells that are still remaining in the air from the last user.

The innovation is a blessing for captured brief buyers who do not wish to mess up into the after-effects of another person’s curry or spicy bean stew.

Footage of the brand-new bathrooms reveals a lady mocking the technological marvel as she studies the ‘odour index’ to select which bathroom is the best to utilize.

The female– not called in regional media– had actually shot herself teasing the unusual discovery.

In the video, she points towards a big screen on display screen outside the general public bathroom door in the shopping mall demonstrating how much each of the stalls smells.

The female can be heard attempting to keep back her laughter and stating in Chinese: ‘Such “high technology” is not required!’

She later on shared the video on Douyin– the Chinese variation of TikTo k– leaving netizens simply as baffled as she seems.

One user, under the manage ‘Big waves washing sand 181’ jokingly commented: ‘Maybe it can also detect whether there are gynaecological diseases.’

Another user had a much better concept of what technological advances need to be utilized for and stated: ‘Install a monitor in every toilet to check whether there are cockroaches and mice in the toilet.’

And one user with the manage ‘Fat Boy Snail Noodles (Xiaoxi Street)’ plainly detected the personal privacy ramifications of these odor sensing units. They asked: ‘Will this spy on you?’