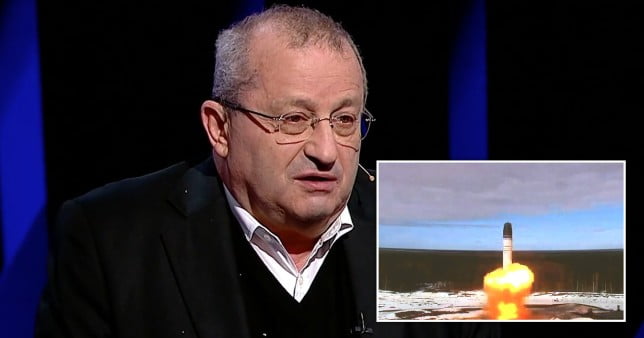 A Russian state expert has actually informed his nation’s military to bomb Britain’s power stations and take us ‘back to the Stone Age’.

Broadcaster Yaakov Kedmi stated Russia must strike the UK with its Zircon rocket– a hypersonic rocket efficient in reaching 6,670 miles per hour.

He then recommended among Russia’s nuclear-capable Sarmat rockets would be ‘too good’ for the UK.

‘There is no requirement to utilize [such a big weapon] for Britain at all,’ he stated.

‘One or one-and-a-half launches from a multi-purpose submarine with Zircons will be enough. About 50 or 60 of Britain’ s power stations will be entered 10 minutes, and Britain will be back to the Stone Age.

‘Within 10 minutes, nothing else is needed. It’ ll be back to the Stone Age in 10 minutes.’

He included: ‘However much we would hate to admit this, virtually the entire world is against us.’

Yet Kedmi signs up with a long list of Russian broadcasters who appear delighted to threaten the UK with huge words.

Last month, Channel One’s 60 Minutes launched a video showing how Europe might be obliterated in 200 seconds and leave ‘no survivors’.

Kremlin propaganda likewise alerted Britain would be ‘plunged into the sea’ and ‘drowned in radioactive tsunami’ if Russia released a nuclear attack.

Dmitry Kiselyov, commonly called Putin’s propagandist-in-chief, was recorded stating: ‘What will happen after Boris Johnson’ s words about a vindictive strike on Russia?

‘Why do they threaten huge Russia with nuclear weapons while they are just a little island?

‘The island is so little that a person Sarmat rocket suffices to drown it at last. Russian rocket Sarmat [also known as Satan-2], the world’s most effective … can … ruining a location the size of Texas or England.

‘A single launch, Boris, and there is no England anymore. Once and for all. Why do they play games?’