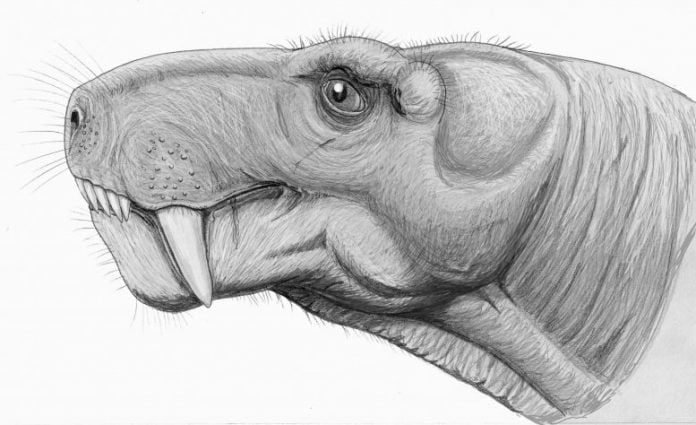 Gorgonopsian were the very first saber-toothed animals. Their dogs extended as much as 13 centimeters. Credit: CCA 3.0/Dmitry Dogdanov

When many people consider relentless, blade-like teeth on ancient animals they visualize Smilodon, much better called the saber-toothed tiger. But on the planet of dinosaurs, theropods are popular for having blade-like teeth with serrated cutting edges utilized for biting and ripping their victim. And up until just recently, the complex plan of tissues that triggered these frightening teeth was thought about distinct to these meat-eating dinosaurs.

In a paper released on December 16, 2020, in Biology Letters, lead author Megan Whitney, postdoctoral fellow in the Department of Organismic and Evolutionary Biology, Harvard University, analyzed thin fossil pieces of gorgonopsian’s teeth and found comparable complex plan of tissues that made the steak-knife-like serrations in theropods. Thin area of a partial gorgonopsian dog under polarized light. Serrations appear on the ideal side of this specimen. Credit: Megan Whitney

Gorgonopsians are a group of synapsids from the middle-late Permian 270-252 million years back. These animals, like other synapsids, are thought about to be the leaders of mammals and fall within the family tree that ultimately triggered mammals. “These animals were the apex predators of their day and are characterized by their sabre-like canine that could extend up to 13 cm long,” stated Whitney.

Previous research studies of theropod dinosaurs discovered an intricate plan of tissues made from both enamel and dentine that formed the serrations on their teeth. This complex plan was thought about distinct to theropod dinosaurs. But nobody had actually ever made a thin area of a gorgonopsian tooth before to take a look at the serrations.

A total sabre-toothed dog from a gorgonopsian from Zambia. This specimen consists of both the crown (top) and root (bottom) of the tooth. Credit: Megan Whitney

Inspired, Whitney and co-authors integrated their proficiency in paleohistology (the research study of the microstructure of fossilized skeletal tissues) and analyzed thin areas of fossils from 3 synapsids from 3 various period to evaluate a theory of the structure of the serrations in this group. “We were surprised to find theropod-like serrations in gorgonopsians,” stated Whitney. “We wished to see how other meat-eating synapsids had actually made their serrations, so we took a look at an older synapsid [Dimetrodon] and a more youthful, mammalian synapsid [Smilodon].”

Gorgonopsian, Dimetrodon, and Smilodon are all synapsids and like theropods were pinnacle predators of their day and had actually serrated, knife-like teeth (i.e. ziphodonty). Dimetrodon is among the earliest synapsids throughout the Cisuralian duration around 295 to 272 million years back; Dimetrodon is frequently wrongly referred to as a dinosaur. Smilodon resided in the Americas throughout the Pleistocene epoch 2.5 million to 10,000 years back. “All of these animals fall along the mammal-line which is divergent from the reptile line with dinosaurs,” stated Whitney. “In fact, these three animals are more closely related to humans than to dinosaurs.”

The thin areas exposed that the gorgonopsian serrations are made up of tightly-packed serrations made from both enamel and dentine, the very same complex plan of tissues that had actually formerly been credited to theropod dinosaurs and thought about distinct to them. “What’s unexpected is that the kind of serrations in gorgonopsians are more like those of the meat-eating dinosaurs from the Mesozoic age,” stated LeBlanc. “It means that this unique type of cutting tooth evolved first in the lineage leading to mammals, only to later evolve independently in dinosaurs.”

“The fact that we only see this type of serration evolve in meat-eating animals is significant,” stated Brink. “The tiny microstructures hidden inside the teeth offer a significant advantage to the tooth, strengthening the serrations and helping them last longer in the mouth, which in turn helps the animal eat efficiently.”

Both are amplified pictures of the serrations under polarized light. Gorgonopsian serrations are made from both enamel (thinner, lighter tissue to the right) and dentine (thicker tissue to the left) and an interdental fold (black main structure that is a fold in between the serrations). This specific plan permits more serrations to be firmly loaded along the tooth and makes each serration more resistant to use. Credit: Megan Whitney

Though gorgonopsians share this quality with theropod dinosaurs, they in fact share more attributes with other synapsids like Dimetrodon and human beings. “These animals converged on a similar tooth serration morphology because of the functional benefits, not because they’re close relatives to one another,” stated Whitney. “In this case, it probably has something to do with the fact that animals were really putting a lot of wear and tear on their teeth. And so independently they’ve been able to form a serration that is going to withstand the repeated forces needed to eat because eating is important. So, there’s a lot of selection acting on teeth.”

Gorgonopsians were a varied group with body sizes that varied from the size of a medium-sized pet dog to a bear and Whitney keeps in mind that although the specimens tested had this kind of morphology, it stays possible that there is a variety of serration types that would match the variety of gorgonopsians.