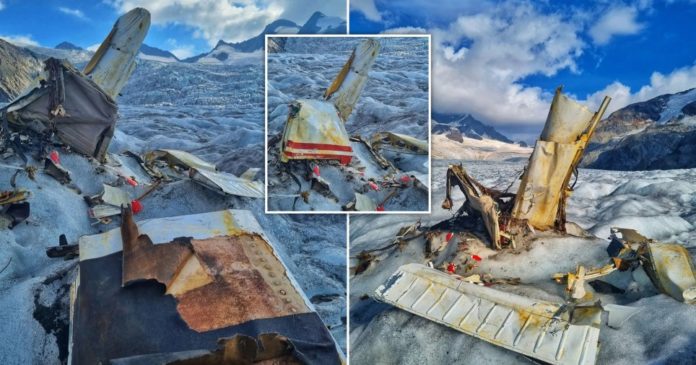 The severe heat in Switzerland is melting glaciers at such a rate that wreckage from an airplane crash more than 50 years earlier and human remains are being found.

Remnants of the airplane from 1968 were found in the Swiss Alps recently, while a minimum of 2 skeletons have actually been discovered independently, reports state.

The airplane pieces were found on Thursday on the Aletsch Glacier in Wallis canton, near the Jungfrau and Monch mountain peaks, cops stated.

‘Investigations have determined that the parts were from the wreckage of a Piper Cherokee, registration HB-OYL, which crashed at this location on June 30, 1968’, regional officers described.

‘Recovery work will be undertaken as soon as possible.’

The 24 Heures local paper stated that an instructor, primary medical officer and his child, who were all from Zurich, were on board and their bodies were found at the time.

It likewise reported that a mountain guide found the wreckage after treking paths around the location were modification to represent melting snow and ice.

Many paths around Europe’s Alps have actually needed to be shut in the middle of the skyrocketing temperature levels around the continent.

Explaining why wreckage was not discovered with the bodies 54 years earlier, cops included: ‘At the time of the mishap, more than 50 years earlier, the technical ways to recuperate airplane wreckage in challenging surface were restricted.

‘Due to the melting of the glaciers, especially in summertime, it is for that reason possible that other pieces or pieces of wreckage might be launched from the ice.

‘In case of discovery, these elements must not be handled in order to avoid any risk of injury. They must be marked and immediately reported to the police.’

There has actually been speculation in the European press about whose remains might have been discovered.

But Swiss media recommend that the Valais cops’s list of missing out on individuals in the location is some 3 pages long.

The Guardian reported that police are attempting to identify the individual and the skeletal remains of another frozen person found about a week later.

The newspaper said two French mountaineers found the bones last Wednesday in Valais, on the Chessjen glacier, near an old path that stopped being used about a decade ago.

It quoted warden Dario Andenmatten, as suggested the pair likely made the grisly discovery because they were using an old map and added that the skeleton was airlifted away by helicopter the same day.

Mr Andenmatten said he expected the person to have died ‘sometime in the 1970s or 80s’.

One hiker, Luc Lechanoine, told Blick newspaper that the clothes they found were neon-coloured, ‘in the style of the 80s’ and that the mummified corpse was slightly damaged but almost complete.