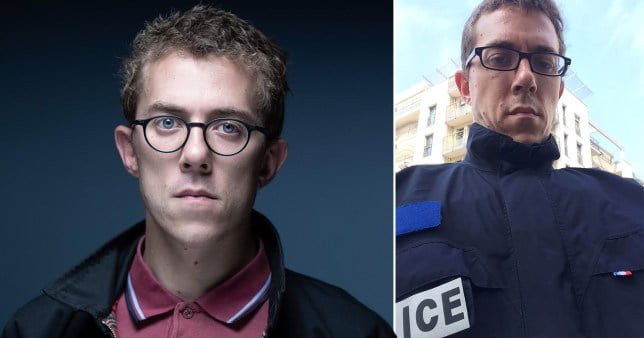 A reporter who penetrated a Paris police states he experienced practically day-to-day violence and a culture of bigotry amongst officers who felt they were above the law.

Valentin Gendrot, 32, invested practically 6 months at a station in a rough northern district of the capital, where stress in between authorities and residents were high.

He states he saw officers attacking children and migrants on a practically day-to-day basis and was ‘shocked’ by ‘racist, homophobic and macho’ remarks from associates, which were ‘tolerated or ignored by others’.

In his book, Flic (Cop), released the other day, the undercover press reporter states he was provided a weapon and a uniform 3 months after training at a cops academy in Brittany.

He was published to a cops psychiatric system for 15 months prior to transferring to the station in Paris’s 19th arrondissement, managing a location swarming with antisocial behaviour, drugs and prostitution.

Gendrot informed the Guardian: ‘It actually stunned me to hear policeman, who are agents of the state, calling individuals who were black, Arab or migrants “bastards”, however everybody did it. It was just a minority of officers who were violent, however they were constantly violent.’

The reporter explains a ‘clannish’ culture in the force suggests officers stick to cover their misbehaviours, causing a sense of impunity.

In his very first 2 weeks at the station he states he saw a coworker battered a teenage migrant in the back of a paddy wagon. He states the occurrence was never ever written, including: ‘What happens in the van, stays in the van.’

In his book, Gendrot composes: ‘What astonishes me … is at what point they feel untouchable, as if there’s no remarkable, no monitoring by the hierarchy, as if a policeman can select – according to his free choice or how he is feeling at that specific minute – to be violent or not.’

He states he was as soon as asked to assist falsify proof versus a teen who was battered by an officer.

Him and associates were contacted us to reports of youths playing music from a speaker when the child was assaulted for talking back.

After the teenager lodged a main grievance, Gendrot stated he would have blown his cover if he didn’t sign an incorrect declaration when asked by associates.

The press reporter stated his book was released in Slovenia and released in ‘extreme secrecy’, with French bookshops buying copies without understanding information.

Only the Guardian and 2 French publications were permitted to check out the manuscript in the workplaces of the publishers’ attorney.

Gendrot said that in France, individuals either ‘like the police or detest them’, and states he desired his book to be a more nuanced and ‘factual account of the day-to-day life of a police officer in a difficult district of Paris’.

He states there were high levels of anxiety within the force, as officers were overwhelmed with documentation and random ‘targets’ while operating in beheaded workplaces and driving battered automobiles.

Last year 59 policeman in France dedicated suicide, up 60% from the year prior to.

Following the publication of Flic, Paris authorities chief Didier Lallement purchased an examination into accusations in the book and likewise referred the mater to the city’s district attorneys workplace.

A declaration by authorities head office kept in mind that ‘at this stage’ neither the identities of the officers explained with pseudonyms in the book nor the accuracy of the accounts are understood.

It stated the examination will likewise figure out why the district attorneys workplace was not instantly warned of the supposed acts mentioned in the book, an evident recommendation to an informal code of silence amongst French police.

Last year Metro.co.uk spoke with British help employees who stated they underwent regular bigotry, harassment and violence from authorities as they attempted to disperse food to refugees.

He pointed out someone who stated they went through 14 occurrences of aggressiveness by authorities over duration of 6 months.