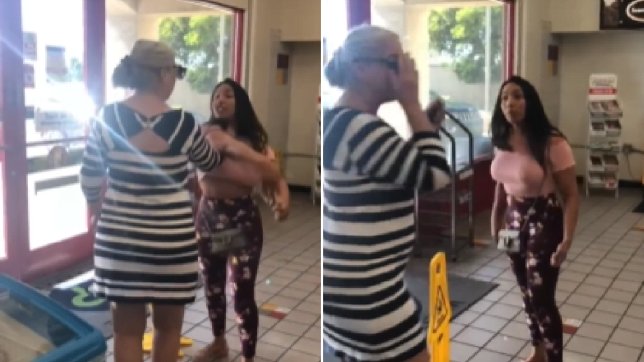 A white lady was slapped by a Native American lady who was obviously fed up with being informed to ‘go back to Mexico.’

The occurrence was captured on video camera at a Shell corner store in Phoenix, Arizona on Saturday and was later on published to Facebook by consumer Greg Conn, who remained in the shop at the time.

Just prior to Conn began recording, he stated the middle-aged white lady burst into the shop madly due to the fact that her gas pump was not working.

Conn stated the lady then entered an argument with the more youthful lady, who was being assisted at the nation, informing her to ‘go back to her country,’ which is when he began recording.

‘Native Americans are from this country,’ the more youthful lady stated prior to informing the clerk, ‘Don’t serve her racist ass.’

The white lady then informs Conn to leave because ‘you’re not part of this.’

She then goes back to the counter and asked the Native American lady, where are you from? Where were you born?’

‘Where are you from, bitch? I was born in America. Where are your ancestors from?They’re not from this nation,’ the more youthful lady reacted.

‘You better go back to Mexico,’ the white lady states prior to entering the other lady’s face and attempting to push her – which made her a quick slap throughout the face.

Conn can then be heard stating, ‘You deserved it, in my viewpoint. Self-defense on her part.

The white lady, who at first declared she was the supervisor of the shop, does not work there and is no longer invite at any of the nationwide chain’s areas, according to TMZ.

Neither she nor the more youthful lady have actually been determined. It is uncertain of authorities are examining the occurrence.