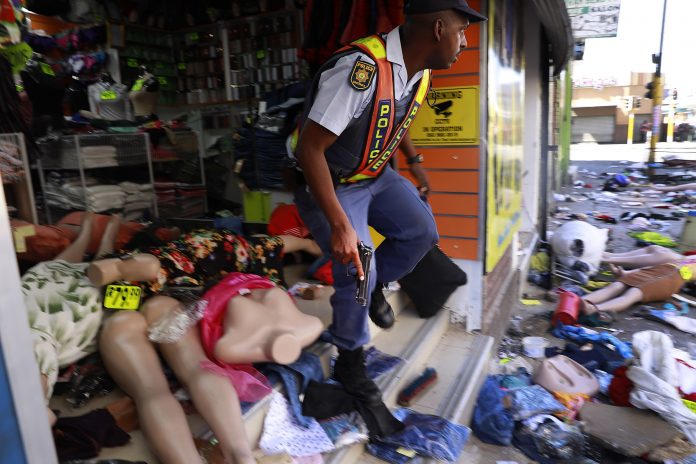 A law enforcement officer is seen throughout as robbery and violence emerges on September 02, 2019 in Johannesburg, South Africa. Shops around numerous parts of Johannesburg, were robbed and set alight. Most of these facilities are owned by foreign nationals.

LONDON — A year and a half given that the South African federal government embraced an action strategy to fight xenophobia, African and Asian immigrants in the nation are still suffering regular harassment and abuse, according to Human Rights Watch.

In a 64-page report released previously this month which included video footage and witness statement, the company declared that in the year given that the application of the strategy, the federal government has actually done “very little to ensure that attacks by members of the public, the police, and government officials are investigated and that those responsible are held accountable.”

HRW recorded killings, major injuries, barriers to justice and fundamental services, displacement and discrimination throughout the year. Non-nationals likewise had a hard time to protect legal representation or get legal status files allowing access to healthcare and education.

“It is unfortunate that such message is intended to sow divisions amongst South Africans and foreign nationals,” the declaration included.

The non-profit pointed out the indifference, rejection or implied approval of federal government authorities and police authorities as permitting such barriers to continue.

“Non-South African nationals have suffered wave after wave of xenophobic violence and live in constant fear of being targeted solely for not being South African,” stated Kristi Ueda, Africa department fellow at Human Rights Watch and author of the report.

“The South African government should hold those responsible accountable to the fullest extent of the law. Impunity only emboldens others and perpetuates xenophobia.”

HRW talked to 51 individuals throughout the Western Cape, Gauteng, and KwaZulu-Natal provinces, consisting of 2 kids, in addition to aggregating media reports and South African legal files, guidelines and judicial choices.

The report highlighted that immigrants were scapegoated for financial insecurity, criminal activities, and federal government failures to provide services, and went through across the country demonstrations and shutdowns defined by mob violence, robbery, and torching of their companies.

Non-nationals were assaulted and by force displaced by mobs wielding weapons and ruining houses and companies in September 2019. Although the South African federal government specified that 10 of the 12 eliminated in the violence were South Africans, Human Rights Watch has actually asserted that a minimum of 18 immigrants were eliminated throughout the violence.

A refugee from Democratic Republic of Congo informed Human Rights Watch: “I was selling clothes on the street when nine South Africans carrying sjamboks and sticks came. They were beating people, shouting ‘You foreigners, go home! We don’t need you here! You are taking our jobs and money!’ I started to run away, but I was beaten, and my two bags of clothes were taken.”

Police raids to punish fake items have actually likewise targeted foreign-run companies, with stores raided and damaged and rubber bullets fired into crowds by cops, according to HRW.

The report likewise declares that the Department of Home Affairs and the cops performed “abusive documentation raids,” in many cases rejecting apprehended immigrants court hearings or stopping working to bring them prior to a judge within the needed period. HRW scientists discovered that authorities have “frequently claimed to have lost or misplaced the arrested people’s documents or other possessions,” according to the report.

On Jan. 14, Aaron Motsoaledi, health minister at the time and now minister of house affairs, apparently firmly insisted: “We are not xenophobic as a department and as a country.”

All interviewees apparently revealed aggravation with the procedure of acquiring or restoring legal status files, especially with concerns to the Section 22 asylum candidate authorization, and still frequently discover it turned down by banks and health centers.

“Protecting non-nationals from further attacks and ending impunity for xenophobic violence requires a long-term strategy and not just words on paper.”