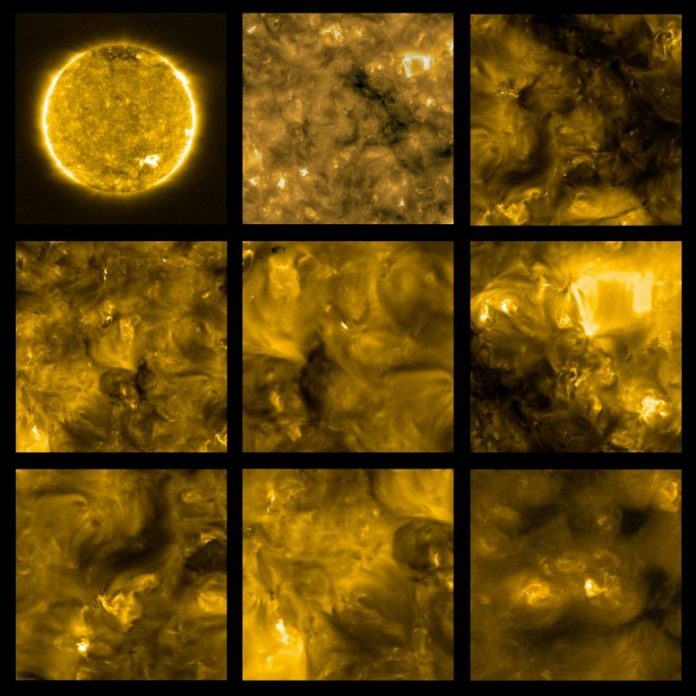 The very first images from ESA’s Solar Orbiter are currently surpassing expectations and exposing intriguing brand-new phenomena on the Sun.

This animation integrates a series of views caught with numerous remote-sensing instruments on Solar Orbiter in between 30 May and 21 June 2020, when the spacecraft was approximately midway in between the Earth and the Sun – closer to the Sun than any other solar telescope has actually ever been previously.

The red and yellow images were taken with the Extreme Ultraviolet Imager (EUI) in the severe ultraviolet area of the electro-magnetic spectrum, at wavelengths of 30 and 17 nanometers, respectively.

The close-up views by EUI reveal the upper environment of the Sun, or corona, with a temperature level of around 1 million degrees. With the power to see functions in the solar corona of just 400 km throughout, these images expose a wide variety of little flaring loops, emerging intense areas and dark, moving fibrils. A ubiquitous function of the solar surface area, revealed for the very first time by these images, have actually been called ‘campfires.’ They are universal minuature eruptions that might be adding to the heats of the solar corona and the origin of the solar wind.

The EUI images are followed by 3 views based upon information from the Polarimetric and Helioseismic Imager (PHI) instrument. The blue and red view is a ‘tachogram’ of the Sun, revealing the line of sight speed of the Sun, with the blue side relying on us and the red side turning away. The following view is a magnetogram, or a map of magnetic propertied for the entire Sun, including a big magnetically active area in the lower right-hand quadrant of the Sun. The yellow-orange view is a noticeable light image and represents what we would see with the naked eye: there are no sunspots noticeable due to the fact that the Sun is showing just low levels of magnetic activity at the minute.

On bigger scales, the Metis coronograph shuts out the amazing light from the solar surface area, bringing the fainter corona into view. Metis observes the corona at the same time in noticeable light (displayed in green) and ultraviolet light (displayed in red) for the very first time with unmatched temporal protection and spatial resolution. These images expose the 2 intense equatorial banners and fainter polar areas that are particular of the solar corona throughout times of very little magnetic activity.

On even grander scales, the Heliospheric Imager (SoloHI) telescope takes pictures of the solar wind – the stream of charged particles continuously launched by the Sun into deep space – by catching the light spread by electrons in the wind. The first-light image from SoloHI is revealed at the end, as a mosaic of 4 different images from the instrument’s 4 different detectors. In this view, the Sun lies to the right of the frame, and its light is obstructed by a series of baffles; the last baffle remains in the field of vision on the right-hand side and is lit up by reflections from the solar variety. The partial ellipse noticeable on the right is the zodiacal light, developed by sunshine showing off the dust particles that are orbiting the Sun. The signal from the solar wind outflow is faint compared to the much brighter zodiacal light signal, however the SoloHI group has actually established methods to expose it. Planet Mercury is likewise noticeable as a little intense dot near the lower edge of the upper left tile.

Solar Orbiter is an area objective of worldwide cooperation in between ESA and NASA.